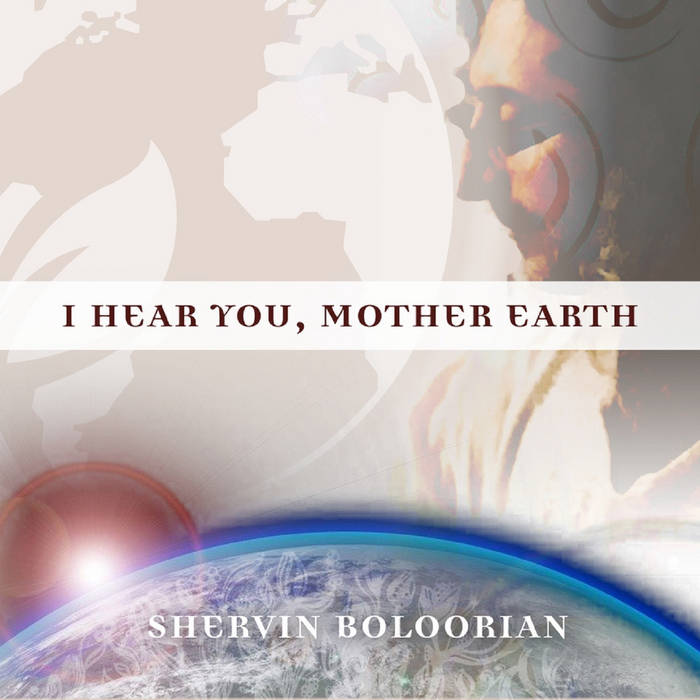 tillyarmit I Hear You Mother Earth
Right from the first 30 seconds I had an overwhelming sense of energy and needed to close my eyes to become lost in the moment I was experiencing.
The energy of this album is an unbelievable journey beautifully meshed with nature music and an energy highlighted by your beautiful voice that not only emits a soothing tone but also gives rise to and releases an energy that flows through on a frequency of love.

zoeannefields "I Hear You, Mother Earth will take you on a journey of discovery where you will feel the nurture of Mother Earth. As Shervin weaves a cacoon of love and protection through his music and angelic voice, you will experience an eternal connection with Source. This profound awakening will allow you to rise in understanding, leading you to nurture Mother Earth in return.

AWITW Shervin offers us once again a magnificent album, with music made from the heart, and shares with us this natural and meditative journey. Thank you my friend for offering the world music of this rare quality. Favorite track: Earth, Water, Wood, Fire, Air & Ether.

These songs feature acoustic instruments used for sound healing from every corner of the globe, almost all of which are presented by Shervin.

Traditional Bali-style voice and instruments are shared from Bali presenter, Gede Artha(Partha), on four of the album’s 12 tracks with Shervin bringing his smooth, delicate, and often mesmerizing vocals to 6 tracks while singing in five different languages.

The album is more than a medicine music collection however, as it also contains nature recordings and pays homage to Balinese ceremonial chants and sounds. Balinese culture professes respect for nature. An underlyingphilosophy of “Tri-Hita Kerana” means harmony with nature, harmony with humanity, and harmony with the unseen divine world, beautifully ties in with the album’s theme.

Below is the “I Hear You, Mother Earth: Planetary Medicine Music” tracklisting, along with each track’s primary instruments, and Shervin’s notes:

1. The Medicine Song, (Triyam Bakham/ Rudra Mantra- Sanskrit):
Triyam Bakham Yaja Mahe is the Sanskrit medicine mantra from India, which is shared for good health and victory over death and disease.

2. Opening, (Balinese Chant) ft. Gede Artha:
An authentic opening chant from the Balinese tradition, which calls on nature and asks for forgiveness for all the abundance that humanity uses from her.

4. Water Element, (Yoruban: Afro- South American “Oshun chant”):
A Medicine Song honoring Oshun– “Ay Ay Oshun, Oromima Oromimayo, Yabado A Yeh Yeh-o” The words and main melody are from this traditional Yoruban song honor the rivers and waterways of the planet, which, according to the Yoruban tradition, are linked to the Goddess Oshun. Thank you Joseph “Pepe” Danza for teaching me this magical melody. I play handpan and kalimba blended with several ocean and water sounds and instruments on this track.

5. Wood Element, (Amazonian “Icaro”):
This contains an Amazonian Icaro, which is a powerful and positive healing invocation. The translation of this medicine song set to an original melody and music is: “The Great Steamboat of the wind is coming. From the end of the Cosmos it comes, it comes like this; All kinds of magical healers come from inside it, also faeries and doctors, from strange cities in space, strong healers are coming.” ~from Piers Vitebsky’sbook “The Shaman”. Bamboo gamelan, and various other wood-based instruments are blended with jungle sounds here.

9. Air/Ether, (Choral) ft. Gede Artha and Hugh Strathern:
An atmospheric choral merging of Latin, Celtic, and Balinese melodies and harmonies to provide a launching point into the element of Ether. Award-winning choir singer, Hugh Strathern (UK) provides gorgeous high tenor accents that float through, while Gede Artha’s (Indonesia) Bali charm also floats through mysteriously to complete the trio of voices. This track like many others on this album is an improvisational piece.

11. Closing, (Balinese Chant) ft. Gede Artha:
Gede Artha returns to share a Balinese chant honoringthe sun’s (Surya) partnership with the earth. GedeArtha’s translation of this chant is ”OM… Great Surya, you glow red, I adore You who stays in the middle of a white lotus. I adore You for creating sparkling sunlight.”

12. The Medicine Song, (Bali Ambient Reprise) ft. Gede Artha:
Triyam Bakham Bali Reprise version. This track features Gede Artha bringing in a traditional version of the Sanskrit chant from India as an overlay to the more contemporary version of the mantra which I sing tubular bells and an old Roland string machine is also included.

A celebrated vocalist and accomplished sound healing teacher-trainer based in Bali, Shervin started Bali’s first sound healing events program back in 2012 at The Yoga Barn. Since launching, Shervin has presented Sound Medicine in over a dozen countries, released two albums, and has been a featured presenter at Google offices in Singapore and at various holistic festivals.

Sound Medicine is based on Fabien Maman’s Tama-Do Sound Harmonizations (Shervin became certified as a sound therapist through the Tama-Do academy in 2011). Sound harmonizations are live therapy concerts with acoustic instruments.

“Given the state of the world, this album carries a hope of reharmonizing with nature, through naturally soothing sounds.”

Shervin started Bali’s first sound healing events program in 2012 at The Yoga Barn, Ubud. Since launching, Shervin has presented Sound Medicine in over a dozen countries, released two prior albums, and has been a featured presenter at Google offices in Singapore and at various holistic festivals.

Recording, production & Editing
Sound manipulation & textures, additional keyboards & tuned percussion on all tracks
Soundscapes & foley captured in many locations around the world on his travels- From the sea shore in Porto Escondido, Mexico to the beaches & backwaters of Sanur in Bali; the rainy streets of Seoul to the lush meadows of NW England to the windy mountainsides of Manigod In the French Alps to the stormy sea front of Blackpool are just some of the many places on this beautiful journey, alongside some carefully chosen library foley for the jungle animals & sea creatures.

“I’ve loved working on this album. one favourite part was creating the sonic soundscapes of our “Mother Earth” to complement Shervin’s acoustic playing textures on this magical journey.”~Ric Peet

All music composed by Shervin Boloorian and inspired by Nature’s Elements and Fabien Maman’s Tama-Do Sound Harmonizations and Bali.

Recording, production & Editing by Ric Peet. Sound manipulation & textures, additional keyboards & tuned percussion on all tracks
Soundscapes & foley captured in many locations around the world on my travels. From the sea shore in Porto Escondido, Mexico to the beaches & backwaters of Sanur in Bali; the rainy streets of Seoul to the lush meadows of NW England to the windy mountainsides of Manigod In the French Alps to the stormy sea front of Blackpool are just some of the many places on this beautiful journey, alongside some carefully chosen library foley for the jungle animals & sea creatures.

Co-produced by Shervin Boloorian. Recorded in September, 2017 in London. Tracks 2 and 11 and additions to tracks 9 and 12 recorded in Denpasar, Bali in December, 2019.

Special Thanks to Paul, Ric, Susie, Hugh, Chris, Florence, Bernard, Bahram, Pepe Danza, Fabien Maman, Margot Anand, Mino Vernaghi, Gary, Fanny, Partha, Simon, Dave and Felicity and the people and culture of Bali and Indonesia who have adopted me and taught me so much these recent years.