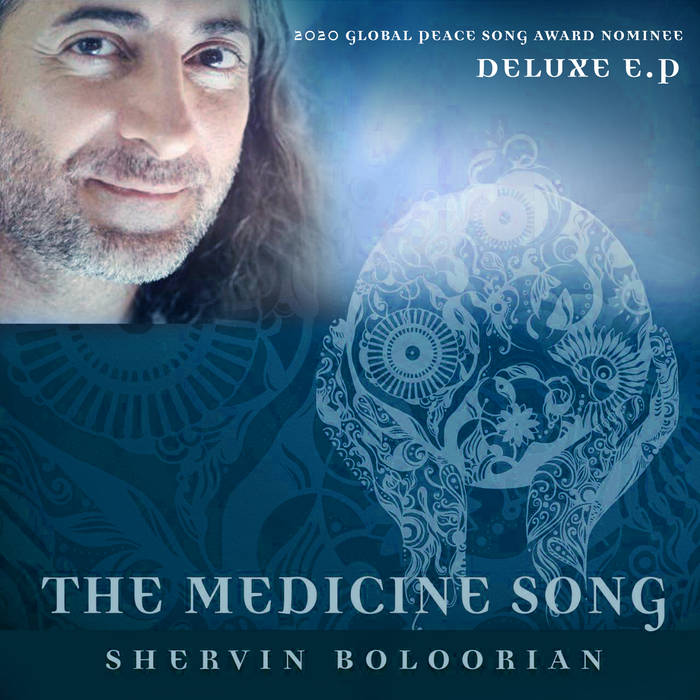 tony Absolutely mesmerising voice, a must for my collection,even if I can’t understand the words,can feel them inside

tillyarmit Carried into a peaceful
Sanctuary upon the frequency of love 💚

The Medicine Song Deluxe EP is a collection of 5 tracks including the 2 versions of The Medicine Song that feature on the album 'I Hear You, Mother Earth' plus an additional 3 tracks, all written by Shervin and produced by 3 different producers.

Simon's Mix: A sweet fairytale-waltz reworking of the original (track 6 from "I Hear You, Mother Earth") with lots of subtle changes. The structure and length of the song remains roughly the same but Simon Mills (UK) deftly subs the guitar arpeggio with a music box bell sound and adds some other sublime touches. Soon the listener is eased into what could feel like a child's enchanted imaginary inner world. A truly magical reinterpretation from someone whose work I have admired since I was turned on to "Bent" when listening on KCRW in Los Angeles in the late 90s.

Hear My Soul, Nico's Mix.
This unreleased song was written before I launched my first album in Bali toward the start of my sound career. It's in English and was recorded and produced by Ric Peet in London, while I was on tour in 2017. Nico Bernard's (France) version brings to life a very barebones original arrangement (just vocals and guitar) and gives it a totally unexpected and delightful flavor. Nico's exceptional ability to blend music for movement and reflection simultaneously comes through with class. We started with an African theme for the song but Nico reworked the tribal vibes and made the remix his own. Once he expressed that he put his "heart and soul" into developing this one, I knew it would be a special addition to the E.P.

Beauty Prayer, Jason's remix
This previously unreleased song was recorded in 2020 in Bali. It is produced by Jason Felitto (Boston, USA). The words are derived from a famous indigenous blessing. The original prayer is in Dine (the language of the Native Navajo tribe). The English translation is "May I walk in Beauty in a sacred way, May there be Beauty before me, May there be Beauty behind me, Beauty above me, Beauty below me, Beauty all around me; Beauty within me." I consulted with Wayne Wilson (Arizona) who is a tribal community member from the Dine Nation and received his blessing for my musical version. The Dine and other tribal families have been hit disproportionately hard by Covid 19, please help if you can by donating to Wayne's food bank and community service fund for the Dine, Hopi and Apache communities. Learn more info or make a donation at www.gofundme.com/f/din039e-relatives. On top of his studio production expertise, Jason also delivered live bass, grooves and other keyboard additions. Look out for more of his quality musicianship in my future releases.

A special THANK YOU to Ric Peet, who brought his production wizardry to both versions of "The Medicine Song" included in this EP and its host album. This project was a labor of love for both of us and he showed up to the songs with perseverance, professionalism, and commitment, even during some very low moments in our personal lives. In three years, he never complained in spite of my constant calls to keep the tracks as close to the natural "living" music experience as possible. His innovations and clever abilities to creatively navigate my musical vision and style made all the difference . It was the first time Ric had been asked to work on this type of project. Listening to the contents of "I Hear You Mother Earth" now, I hope it was as well worth it for him as it was for me.

Lots of gratitude and love to the brilliant creative souls above and all the other outstanding talents (musical and non-musical) who enriched this homage to humanity's ancient music medicine roots. We need more healing sound and energy now in the world than ever before.

Ric Peet (producer)
broke into the music scene in the late 1980's
with a bang, scoring a number 2 hit in the
UK with a cover of 'Strawberry Fields' with
Candy Flip. Over the years he has produced
and engineered on albums with the likes of
Muse, Charlatans and Six by Seven is
currently making music with Crazy p
and his own band International
Peoples Gang.
Simon Mills (remixer)
is one half of the electronic chill out duo Bent
who came to prominence in the early 2000's
with their magical albums Programmed To
Love, The Everlasting Blink and Ariels.
Currently working on a new Bent album Simon
also produces under his own name and the
moniker Napoleon for his dreamy house
productions.
Nico Bernard - AWITW (Remixer)
is an Electronic music composer and remix
artist from Nantes, France. Nicolas is a
classically trained musician whose success has
gained critical acclaim from fellow electronic
DJS and the press. AWITW created a unique sound and brand for
himself. His debut EP was released on
"Night Noise"
Jason Felitto’s piano study began at age five with Alouette Hedges in Fairfield, Connecticut. As he continued to study and perform, he participated in many competitions, and won first prize in Bronxville, New York’s prestigious Littmann Music Competition. His studies in New York also include The Manhattan School Of Music where in addition to his piano studies, he studied String Bass with Linda McKnight. Jason received his B.M. in Piano Performance from The Boston Conservatory, where he studied with Janice Weber and was a finalist in the Conservatory’s Honors Competition. Jason has participated in groups ranging from chamber music to progressive jazz and fusion and is owner of HoneyTrain Music Services and Bandleader of HoneyTrain Jazz and Dance band which performs regularly all over the new england area. Hi also owns My Lady on Fire recording studio in Boston and is the head engineer.