One with the Beloved 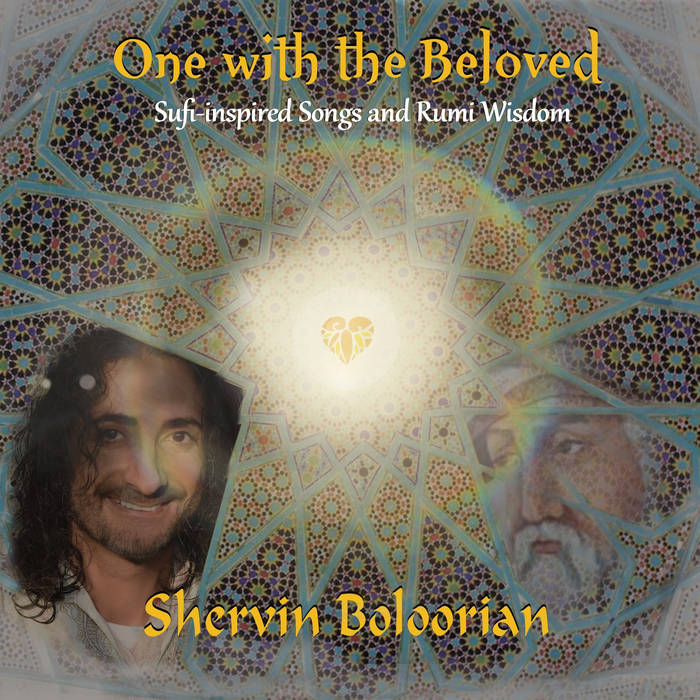 Jason Michael Powers Sherwin is a dear Soul Brother of Lifetimes and his Music reminds of the Pure Essence of LOVE, the Lover and the BeLoved within ALL Life.
Favorite track: Al Fatiheh / Eshgh Allah Mabud Allah.

One with the Beloved offers 12 tracks of heart opening, Sufi-inspired songs in Persian and Arabic with a blend of traditional sacred chants, Zikr mantras, ancient healing songs, and modern compositions drawn directly or inspired from the classic texts of 13th C. Poet/Philosopher and Saint, Jallaludin Rumi.

"I celebrate Shervin Boloorian's songs, his voice and his vision." ~Coleman Barks, Poet, Translator and Bestselling Author of 'The Essential Rumi.

“The Sufi message…It is not the message of the East. But is the message of the soul.” ~Hazrat Inayat Khan (Master Musician and Sufi Mystic)
This album was created out of my desire to bridge the growing distance between Eastern and Western cultures, so the songs belong to none and to all. Just as Rumi says “Not Christian or Jew or Muslim, not Hindu, Buddhist, Sufi, or Zen”, the album is neither Sufi, nor World Music, nor sound meditation, nor Muslim, nor poetry, nor entertainment: although it contains features from all of the above. Secondly, its goal is to provide an irrefutable demonstration of how a literary giant (Rumi) from the Islamic world can touch every heart with his humanity. The texts contained; produced over 800 years ago, are profound, universal and lushly layered with messages of friendship, peace and wisdom. It is my personal hope that through the soul language of music and ancient words as they were uttered in Rumi’s time, the listener can tangibly relate to the Middle East as a rich source of literature and arts during a time when our associations have been hijacked by decades of political gridlock and violence. I am also inviting the people of USA, UK , Iran and elsewhere to accept that Western and Eastern cultures are more than compatible than what certain leaders would have us believe and able to not just coexist, but to relate on deep levels; to thrive together and create new levels of insight and understanding in today’s world. When guided by the ancient voice of a Sufi master like Jallaludin Rumi, no one can doubt that peace is possible, practical, and essential to our race’s survival and our individual evolution.

Akbar
This is composed in an Arabic Zikr style and draws from the opening words of the famous “Call to Prayer” heard throughout Maschehs (Mosques) five times a day. It is a shortened and more meditative version of what I play live and contains musical talents of my Javanese friend, Syafril, who weaves in phrases from the “Call to Prayer”.

Bismillah Eh Rahman / La Illaha I’ll’Allah
The most popular opening phrase found in all but one of the Quran’s chapters. In Arabic, it means, “In the Name of God, the Compassionate and the Merciful.” I merge this Sufi Zikr phrase with another Arabic phrase in this song: “La Illaha I’ll’Allah”, which means “God is One” or “All is Divine”.

Asheghi Peydast (Discovery of Love)
(Combines 2 lines of Rumi’s Quatrain Rubaiya #99 with text from Rumi’s Masnavi Book #3, Chapter 6, Vs.1)
Rumi text in this song begins with a question and an invitation to follow the call of a stringed instrument (the Rabab). The gift of surrendering to music’s (and sound’s) message (to Rumi) is that the “way” can appear. He could be pointing to the way to mysticism; to the world of the senses; to divine inspiration; to the way of the soul etc.
The second part is from another Rumi poem that gives meaning to the grace of adaptation and to the relationship between “light and love”. To me, it explores how love’s discovery can be felt like a great poison to some, BUT we still turn to face the sometimes unbearable light of the sun by following that light to proof of its source. The same compulsion, leaves us with no choice but to face and not fear love’s overarching presence in this life; even when sunlight can burn; even when we are told and forewarned here that “there is no greater sickness than that which infects the heart than the lover’s sickness.”

Baza (Come Again)
(Rumi’s Masnavi Book I)
"Baza, baza, har anche hasti baza
Gar kafaro gabro botparasti baza
in dargahe ma dargahe na-omidi nist
sad bar agar tobe shekasti baza"
Come, Again
Wanderer, idolater, worshiper of fire,
Come even though you have broken your vows a hundred times,
Come, and come yet again.
Ours is not a caravan of despair
This poem is inscribed on Rumi’s tomb. Controversy exists over whether it is originally Rumi’s or by Abousaeid Aboulkheir. It seems unusual that it would be found in Konya at Rumi’s resting place alongside his other famous texts, if it is not Rumi’s original work. Regardless of the attribution, the message of radical acceptance rings true to Rumi’s teachings and to that of all who embrace forgiveness.

Three Butterflies*
Text by Fariduddin Al-Attar
I’m grateful to Pejman Jahanara, an Iranian Sufi initiate, for teaching me this melody. A different version of this song is found on the “Baba Aziz” soundtrack. It is based on a popular Sufi legend about the world of all those who love being divided into three types of butterflies/moths dancing on the edge of a flame. One rough translation reads like this:
“All of us in reality are like three butterflies. We are legends in the lovers’ world. The first came near the candle and said: ‘I’ve discovered love’s meaning’. The second fluttered its wing near the flame and said: ‘I’ve been burned by love’s fire’. The third dove into the heart of the fire. Yes … Yes … This one heeded to love’s meaning …” / Attar

Al Fatiheh / Esgh Allah Mabud Allah
This song contains the opening verse or “Sureh” of the Quran. It is said that the entire Mosalman (Muslim) teachings can be condensed into this one Arabic verse. The Zikr part of the title translates to “God is Love, Lover, and Beloved.” The music has an African style and is the first of its kind as far as I know. It is skillfully accompanied by my friend, Vieux, on African Harp (Kora). To me, it is a blessing, a prayer for aid in a time of need, a reminder to stay on the path of faith, and pays homage to creation and Creator.

Heart of Silk*
Persian words and melody for this piece are taken from a popular Iranian folk song, which is over 100 years old. Mine is a more meditative and positive version containing longing and mystery through the addition of the Oud (Lute) and more uplifting lyrics which pertain to connection and friendship. The word “Yar” “beloved friend”, is repeated here at the end of each verse. The phrase “Aziz Delomi”, meaning “dearest to my heart” is also included. This song to me is an invitation to come home to what is meaningful - even if it may not be possible to feel at home otherwise.

Earth and Sky
The Persian text here is original combined with a Sufi Zikr style chant of “Allah Hu”. It is popular at my movement meditation workshops. The lyrics are an affirmation of the connection to all things and indirectly inspired by Rumi text in “Divane Shams #116” and a more modern variant by poet, Ali Heydariey (Iran) from his “Booyeh Noor”. Bahram Bolourian located these sources and Parvin Boloorian helped me with completing this song and finding fitting words and phrases for the arrangement.

Az Nour (From Light)
(From Rumi’s “Divane Shams” Ghazal #1532)
Let us fall in love again
and scatter gold dust all over the world.
Let us become a new spring
and feel the breeze drift in the heavens' scent.
Let us dress the earth in green,
and like the sap of a young tree
let the grace from within sustain us.
Let us carve gems out of our stony hearts
and let them light our path to Love.
The glance of Love is crystal clear
and we are blessed by its light.
Translation by Azima Melita Kolin and Maryam Mafi - "Rumi: Hidden Music"
There is a wisdom of clarity within the words here. Turning dust into gold for scattering over the world. Surely this key ingredient of a loving heart can be behind any so-called Alchemy in the world.

Allah Hu
Another original text. Parvin Boloorian helped me to arrange the words of theses verses. It is about perseverance and dedicated to all who carry the label of refugee. Zendam means “I live”. “Hu” means all that which is. Sufis repeat this phrase during Zikrs and treat “Hu” the same as “Om” in the Yogic traditions. According to many mystical paths, all life comes from sound vibration.

Recorded in Bali, 2017 at Shakyamunya and Antida Studios
All vocals/instruments/arrangement/ original music by Shervin Boloorian except *:
Bansuri Flute on track 4 by Monika Fries
Bass by Chris Edward
Clarinet on track 10, Syrian Oud on track 7 and Mandol on tracks 8 and 12 by Gilles Saisi
Keyboard/Bass/Grooves on tracks 6 and 3 by Dinesh Allan Mattuck
African Kora on tracks 2 and 6 by Vieux Cisshoko
Backing Voice and Ney Flute on tracks 1 and 11 by Syafril Firdaus
Percussion on tracks 2 and 8 by Wanto and Cello on track 5 by Algimiro Cesarino
Producers: Shervin Boloorian and Gilles Saisi (tracks 1, 5, 7, and 8), Ric Peet (tracks 2 and 4), Dinesh Allan Mattuck (tracks 3, 6, 9 and 10) and Gilles Saisi (track 11)
Engineers: Sebastian Cuevas, and Racka
Mastered by Mark Ward (Love My Media)
Original texts for tracks 3, 4, and 8 and inspiration for track 8 from Sufi Saint Jallaludin Rumi
Tracks 2, 6 and 8, and 11 Sufi ‘Zikr’ inspired
Track 5 traditional Persian Sufi song with Persian text by Sufi Master Faridudin Attar
Track 7 contains text/melody from Iranian folksong “Dast Be Dasmalom”, Words for tracks 8 and 10 co-written by Parvin Boloorian
All songs in Persian or Arabic
Dedicated to my parents and to anyone who has ever been mistaken for an outsider, especially to themselves.

Special Thanks: to all 134 backers of this vision of peace through music and the arts - this is our co-creation! Syafril for teaching me the Al Fatiheh prayer on track 5, Paul and Steph Smith, Maman Parvin for her love of ecstatic poetry, Narges Pashmchizadeh for her Molana knowledge and consulting, Gilles and Taty, Shira Van Spanje for cover photo, Evelin Olev for album design and graphics, Steph Moonriver for sketches, Baba Boloor, Dave and Felicity, Heath Werrett, Arian, Nooshin, Bahram, Janti, Tama-Do Academy for the intro to ‘Hazrat Inayat Khan’, Chris Edward, Coleman Barks, Josefine Tischendorf, Pejman Jahanara, Nico Bernard, and all our community sponsors.